Kristie has been with Norway Veterinary Hospital since August of 1997. She is a member of Dr. Gauger’s orthopedic technician team. She received her degree in Animal Medical Technology at University of Maine, Orono. She lives in West Paris with her husband, Tony, and their three children Gabby, Chloe, and Zach. She has a black lab named Eddie and a cat named Baily. When she’s not working, she enjoys reading and spending time with her children.

Ang D. has been a technician at Norway Veterinary Hospital since March 2004. She grew up and currently resides in West Paris with her three children Kaylee, Quentin, and Derrik. She has multiple pets including dogs, cats, and rabbits. She likes to spend time with her family and follow sports outside of work.

Kaylene realized her love for animals and passion for veterinary work during a two-week shadow rotation with us as a high school sophomore. She’d planned to work in human medicine, but after a short time at NVH, she knew she was in exactly the right place!

A native of South Paris, she’s the proud pet parent to Diesel who used to enjoy chasing Kaylene’s brother around on his dirt bike but would now rather get belly rubs in front of the fire, and Stella, who’s playful and loves chasing squirrels and cuddling.

In her free time, Kaylene enjoys walking and hiking in the woods. 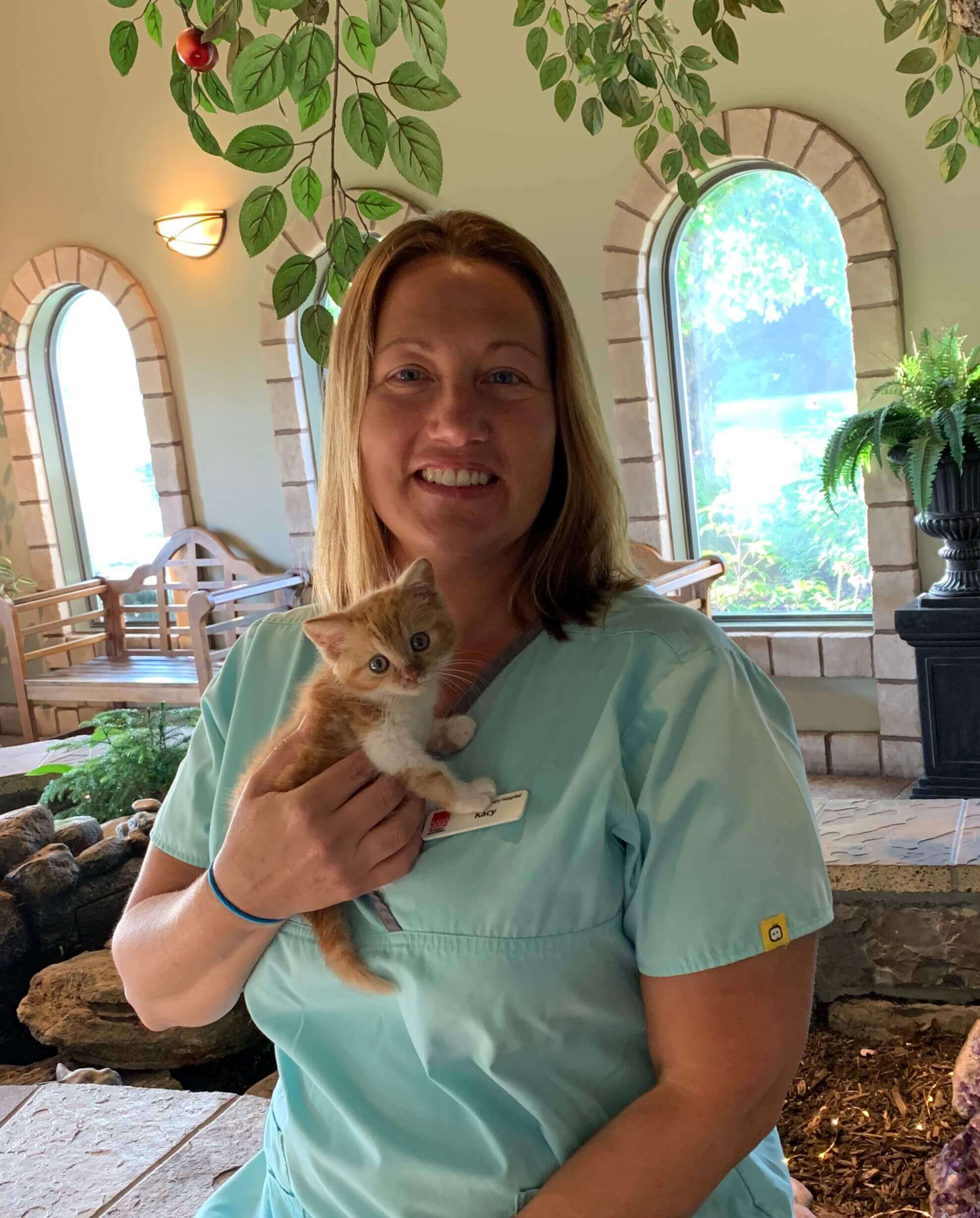 A native of Bridgton, Kacy worked at Norway until 2009 when she moved to Connecticut. Then she returned to our practice because she so much enjoyed being part of our team.

A life-long animal lover, Kacy graduated from NH Technical Community College in 2005 with her LVT degree. At home, she’s proud mom to Summer, whom she found as a kitten on the side of the road; Pogo, a three-legged cat; Crystal, a Siamese; Cinnamon, a Min Pin/Dachshund mix; and a slew of chickens and turkeys.

When she’s not working, Kacy can be found camping, snowmobiling, helping out the local firewood business Black Fly Firewood, and spending time with her family.

Chelsea joined us in October 2016.

Kyle interned at Norway in 2016 while pursuing his Associate’s vet tech degree from the University of Maine at Bangor.

Born and raised in Oxford Hills, he grew up in a family of animal lovers who began bringing pets in when he was 11, starting with Beckett, a Golden Retriever who has since passed.

Kyle was inspired to enter the veterinary field when he was still in high school and learned of an increase in animal cruelty, abuse, and neglect in his home state. He wanted to do something to reverse that trend.

A native of Georgia, Faith moved to Maine to be closer to her family. She has been an animal lover ever since she can remember, taking care of everything from horses to squirrels.

Her furry family consists of Brina, a Lab/Rottie mix, and Angel, a Yorkie. Both dogs enjoy hiking, eating, going for car rides, and sleeping in their mother’s bed.

Originally from Woodstock, Ciara has lived in Maine her entire life. She used to bring her own pets to Norway and when she decided she wanted to be a vet tech, she sensed she’d end up here.

Ciara attended St. Petersburg College, intending to be a nurse but then changed majors – to no one’s shock. She’s always loved animals and her furry (and feathered) family proves it. At home, she cares for Ruby, a crazy Redbone Coonhound; Tank, a sweet and smart hound/Lab mix; Phantom, a sweet rescue cat; Misty, a rescue diva cat; and Guantanamo, a crested gecko she’s had since he was just an egg. She’s also the proud owner of 23 bantam chickens.

In her free time, she enjoys showing steers, riding four wheelers, and hunting and fishing with her husband. She can also be found working as a certified nursing assistant at the local veterans’ home.

Jordan worked with us first as an intern while studying at St. Joseph’s College of Maine. Then she was hired on full-time. A native of Bethel, she’s always wanted to work in the veterinary field, helping those in need.

At home, she’s the proud caretaker to Nijan, a Huskie who loves to hike tall peaks and get his belly rubbed; Nitro, a German shepherd that lives for playing ball and frisbee and swimming in the pond; and Teeko, a Husky who never stops talking and was born with no tail.

A native of Hampden, Roxanne recently moved to the area with her fiancé after graduating from University of Maine, Bangor with her veterinary technician degree. She also holds a B.S. in wildlife ecology with an equine studies minor.

Roxanne grew up surrounded by animals. At home, she has Sugar, a paint horse with lots of spunk, and Lulu, a spitfire of a cat she bottle-fed from a two-week-old kitten.

Lee Ann has been with Norway Veterinary Hospital since June of 2000. She is our lead receptionist and graduated from Edward Little. She lives in Hebron with her husband, Joey, and they share their home with their three dogs, Piper, Dunkin, and Charlotte, and cat, Oliver.

A native of the Oxford Hills area, Caleigh grew up bringing her pets to NVH and always wanted to work here. Her parents wouldn’t let her visit pet stores because, when she did, they always came home with a new family member, and working at RPC only strengthened her resolve to work with animals.

Her furry family consists of two rescue dogs, Finley and Sammi Jo. In her free time, she enjoys playing with her dogs, going four-wheeling, and being with family.

A native of Mechanic Falls, Darcey found her way to Norway after having lived away for 14 years. She grew up around farm animals and pets and while she never went to school for animal care, she honed her veterinary skills on the job at PenBay Veterinary and elsewhere. She also works as a Wilderness First Responder.

Darcey loves the outdoors and enjoys hiking in the Maine woods and being with family in her free time.

Stephanie joined our team, having heard of NVH from a friend. She knew she wanted to work with animals when she was still in elementary school and visited a veterinary hospital booth during a job fair.

She’s had pets her whole life. Her furry family currently consists of Tucker, a very mellow yellow Lab who thinks he’s a lap dog and listens to Stephanie’s eight-year-old daughter better than he does to her, and Owen, a cray husky/pom mix who lives by his own rules.

In her free time, Stephanie loves taking road trips with her daughter and being with family.

Taylor grew up in Sebago, moved to Casco, and now she’s happy to be settled in Naples and working at Norway where she used to bring her pets as a child.

As a young girl, she was surrounded by critters, including horses, dogs, cats, and hamsters. Working with animals has always been her dream.

Her furry family consists of Finnegan, a border collie, and Tucker, a cockerpoo. Finnegan is a handsome boy and knows it. He poses for pictures and always has a smile on his face. He’s Taylor’s go-to companion for adventures and a laugh. Tucker is happiest when curled up under a blanket. He’s Taylor’s ‘shoulder to cry on’ dog and is always there to comfort her. She has a feathered family as well, and in her free time, Taylor loves being outdoors with her dogs and chickens. She also enjoys video games, photography, reading, and drawing. 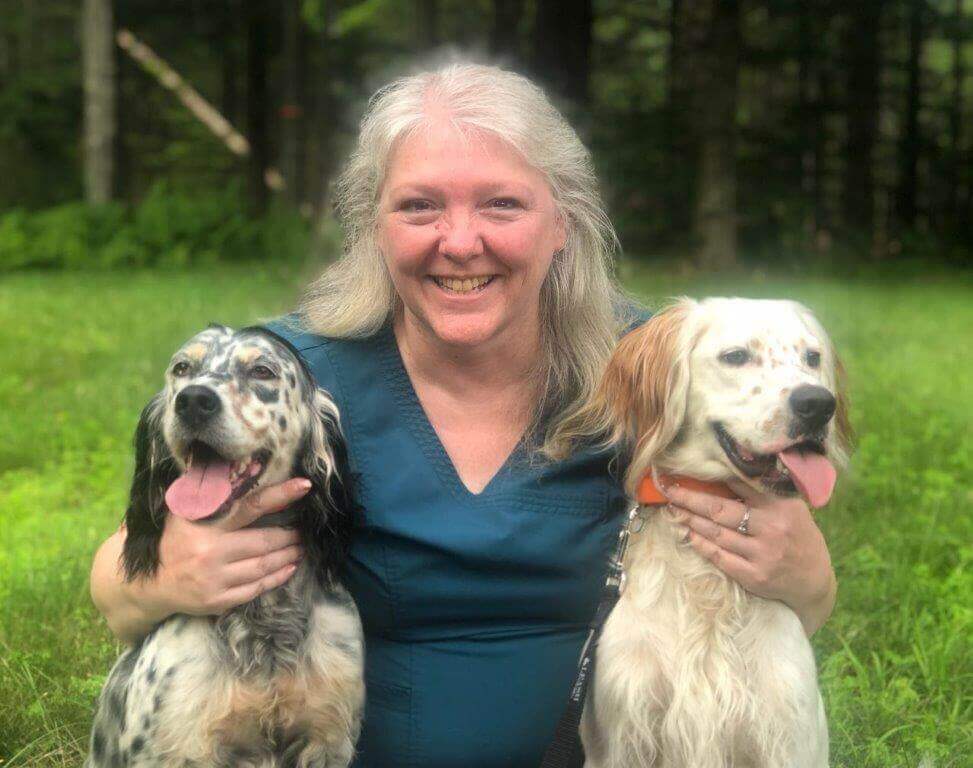 Tina is a native of Maine. After her father’s service in Vietnam, he moved the family to New Jersey, but when her parents divorced 10 years later, Tina returned to her home state where she earned her Associate’s Degree in Medical Secretarial Sciences and worked in medical transcription for 30 years.

She learned about the possibility of working in the veterinary field from her son, a veterinary technician. She applied here shortly thereafter and was hired.

In her free time, Tina enjoys hunting, as well as quilting and working on her home remodel project. Her newest project was her daughter-in-law’s wedding gown.

Kristen Gauger owns Norway Veterinary Hospital with her husband, Todd.  She also provides complementary medicine such as reiki, flower essences, and crystal therapy. She lives in Sout Paris with her husband and their two children, Derek and Megan. They share their home with three dogs Taylor, Hooper, and Cuddles, along with several cats. She enjoys spending time with her family and practicing her complimentary medicine.

I have a Golden Retriever named Jones, a senior Chihuahua named Wynifred, and 2 cats – Diggory and Casco. I started working at the Naples Clinic in a part-time position in 1998. My position has grown and been added to since. I love to read and go hiking with Jones and my family or friends.

Tammy began her career as receptionist in our Naples office. She then went on to train as a technician, working both in the Naples and the Norway clinics. In March 2016, she joined management as human resources manager.

She’s had pets all her life and spent numerous hours in horse barns as a young girl. Over the years, she’s cared for dogs, birds, fish, and a few reptiles—thanks to her sons. Her current furry family consists of Yorkie mixes Sophie and Sadie and Sammie, a full bred Yorkie. All the dogs have different personalities. Sophie loves lounging in the sun and is the social butterfly, Sadie loves chasing squirrels and chipmunks and being attached to Tammy’s hip, and Sammy is three pounds of adorable fur and fun that the family adopted as a rescue when he was 12 weeks old.

In her free time, Tammy enjoys fishing, riding ATVs, and being with family. When she’s not outdoors, you can find her watching horror, mystery, and western movies.